Is walking down the street a major health risk?

It seems like an odd question, but it’s relevant to the issue of wind farms and human health – something that has, surprisingly, come up in the media in recent weeks.

In our experience dealing with communities near our operational wind farms, we’ve found that the overwhelming majority of people that live near turbines are very happy with their presence.

The Australian Wind Alliance went to the effort of creating a series of videos in which they talk to residents living near the Waubra Wind Farm in Victoria. You can see the videos here, or have a look at the embedded one below.

It’s important to look at the science alongside the real experience of individuals and communities. In that vein, we’d like to briefly summarise three recent pieces of research that have come out in recent months that relate to the issue of health around wind farms. 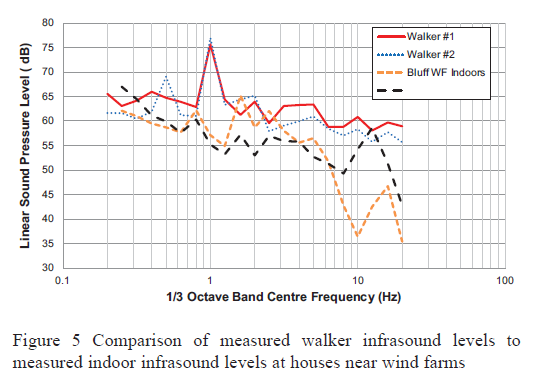 Infrasound is ubiquitous in our environment – it’s extremely unlikely that, at low levels, we would be responsive to it.

After taking measurements from residents living near wind farms, they found no link between the operation of wind turbines and dizziness, migraines, heart disease, blood pressure, diabetes, heart rate, cortisol levels or measured quality of sleep. There were some increases in ‘annoyance’ levels as sound levels, visibility of turbines, or visibility of aircraft warning lights increased.

The 23rd review of the current body of scientific evidence around wind farms and low-frequency noise emissions, was released recently, and it was published by the following scientists:

Their results are relatively simple:

“(1) Infrasound sound near wind turbines does not exceed audibility thresholds.

(2) Epidemiological studies have shown associations between living near wind turbines and annoyance.

(3) Infrasound and low-frequency sound do not present unique health risks.